Don’t get me wrong, I love interacting with people (haha kinda, but not really) but I especially love being able to help motivate and inspire others on their journey to wellness. Does that sound lame? That sounds kinda lame. However, I get a LOT of the same questions over and over again. SO, in an attempt to not sound like a broken record, here are some basics. I’ll add more as we go along, but for now, read on!

Kiwi? Dafuq? What’s your real name?
Since you’re going to find out sooner or later anyway, my real name is Karen. Kiwi is a nickname that was given to me by a dear, close friend of mine after a mishap with a bad dye job in 2006. I was attempting to dye my hair blue, but alas, I had no idea what I was doing so the yellow from the bleach turned the blue dye… green. This is what Bob Ross calls “a happy accident.” I had a few names come out of it; Mouldy Locks was one of my favourites, but Kiwi was the one that stuck. It started as Kiwi-like-the-fruit, but after researching and finding out that a kiwi was also a bird, I fell in love. I quickly learned everything I could about the endangered, flightless bird from New Zealand. I even had a recurring dreams about a fat, rolly polly kiwi named Meatball… it was a very weird time in my life. Funnily enough, my friend who coined the moniker was one of the very few people who called me “Kiwi” until maybe three years ago. Since then, my internet handle was always “killerkiwi…something-something” and after a few years of having a seemingly hostile username, I decided it was time for a change. So, needing an updated image, yet still staying true to my Kiwi-dom, kiwithetattooedlady was born. More and more people, both online and IRL started calling me Kiwi and I embraced it wholeheartedly. You can call me whatever you want; Karen, Kiwi, K. It doesn’t really matter to me (: 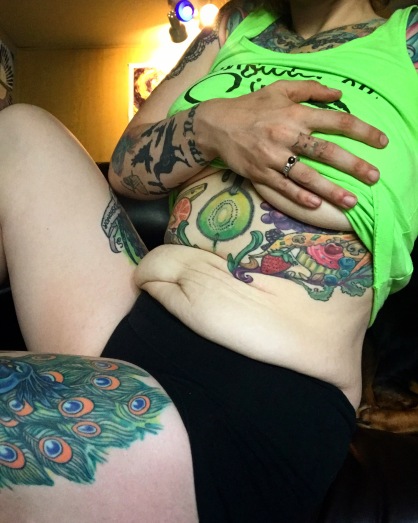 Which surgery did you have?
I decided to have a vertical sleeve gastrectomy (usually referred to as VSG or being “sleeved”) in June of 2014 with Dr. Rayford Kruger at Tobey Hospital in Wareham, MA. 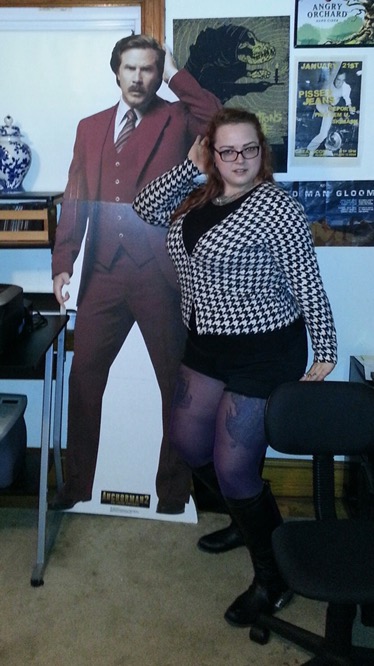 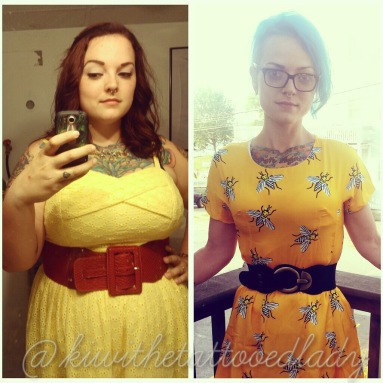 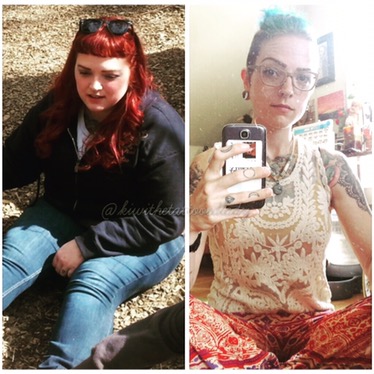 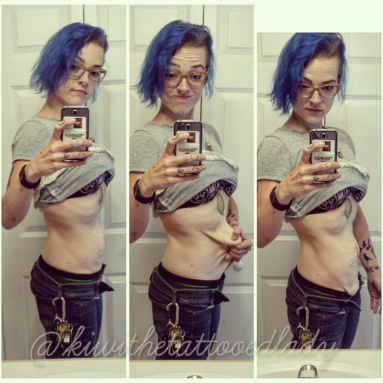 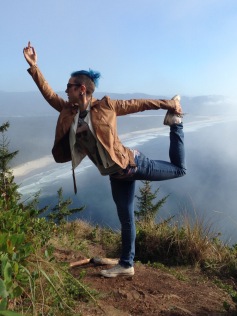 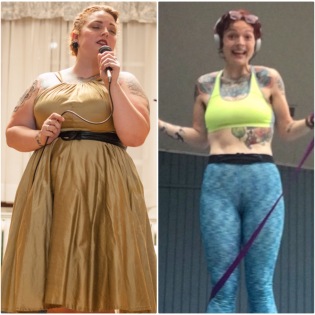 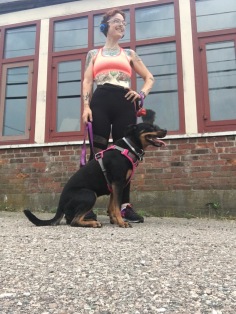 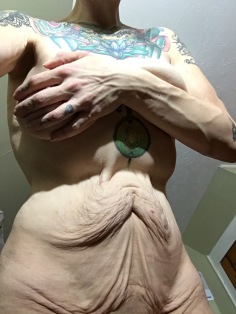 learning to love my excess skin

This bit is especially important.
TAKE YOUR DAMN VITAMINS

What was your pre-op experience like? What was required from your program?
Remember that every surgical team and insurance company is going to have different requirements and processes… PLEASE make sure you are following your programs guidelines! They are the professionals… not me! Now that that’s out of the way, I’ll tell you that my pre-op experience was super simple.

I was working for a hospital group at the time and was insured under the company’s health plan. My procedure was covered as a medical necessity (as my hospital’s requirement was a BMI over 40 without co-morbidities like high blood pressure, diabetes, etc. OR a BMI of 38 with a co-morbidity.) I went to a surgical seminar at the hospital to get an idea of what procedures they do and what would work best for me. I filled out the paperwork and waited for a call back from the surgical team. A few days went by before hearing from them and I had my first surgeon appointment on April 1st, 2014. We discussed the difference between the RNY and VSG (they basically said they rarely perform bands anymore because of the high rate of failure and revisions) and I ultimately decided to opt for the sleeve. After that, I had several required appointments before setting my surgery date. I had 3 psych appointments (which would have been a $500 co-pay; the only thing that wouldn’t be covered under insurance and would have to be paid out of pocket.)

Luckily for me, because I was a member of my hospital’s health plan, the co-pay was waived. I also had 3 pre-surgery support groups/information classes that I originally thought would be pointless, but ultimately ended up loving everyone in my group and learned so much more about myself that I realized. There was two more surgeon appointments, pre-op testing (like blood work, stool sample and EKG) 3 nutrition appointments… and finally… my surgery date. June 16th, 2014; A little over two and a half months after my first surgeon appointment my life would change forever.

The day before surgery I had a clear liquid diet and nothing to eat or drink after midnight. I woke up the next day, ready (and terrified) for the change that was about to happen. I remember being wheeled into the OR away from my mom who was with me in the prep area, crying. I was scared. I had never undergone a major surgery or anything like this before. I knew I was in good hands, but it hit me all at once that my life would never be the same. And now… here I am.

Please keep in mind that this is just what MY insurance and program required. Other insurance plans require that you lose a certain percentage of your body weight before being considered for surgery, others make you document 6-12 months of rigorous dieting. Some programs even have you start a liquid diet two weeks prior to surgery!! This is not uncommon. Listen and work with your team… they are there to help.

How has your weight loss affected your tattoos?
The short answer: It hasn’t. From my understanding, its weight gain that stretches and disfigures tattoos. Sure, they may have shifted position slightly, but there has been no change to the overall integrity of my artwork.

What’s your calorie/macro intake?
I’ve played around with my macro intake to try and find something that works best for the goal I’m working for. Remember that not every lifestyle will suit every body. Experiment! Try out new stuff! You’ll never know how your body will thank you.

I am currently attempting to maintain a lifestyle based on intuitive eating. I am no longer calorie/macro tracking, rather I am trying to stay present by making mindful, conscious decisions with each meal and focusing on listening to what my body needs, instead of what my brain thinks it wants. It’s a work in progress, but I am learning new things about myself every day!

PREVIOUSLY! I have followed this 👇🏻👇🏻👇🏻
1100 – 1400 calories depending on activity level; I obviously consume more calories on training days to help recovery.
110g protein more or less, anyway. I’m happy as long as I’m around 100g, but I always strive for more!
80g carbs or less carbs are not the enemy!! It’s all about moderation, man ❤
60g fat bacon bacon bacon bacon ❤
<50g sugar this isn’t necessarily an iifym requirement… just a personal goal of mine!

What apps do you use? What are your usernames?
My Fitness Pal – kiwithetattooedlady – for logging food (I NO LONGER TRACK MY FOOD)
FitBit – kiwithetattooedlady@gmail.com – activity tracker; currently using the Blaze
Zombies, Run! – no username – running game with continuing story line. Legit the only reason I get up to run every day.
Instagram – kiwithetattooedlady –  for support, inspiration, and motivation! I cannot even imagine how my success may have been different had I not stumbled across this amazing community ❤ I fucking love you guys.
Pintrest – latattooedlady – for yummy food ideas and general musings.

What’s your fitness routine look like?
As of recently, I run anywhere from 3-7 miles a day 3-4 times a week and I take public yoga classes once a week. I’ve been slacking terribly with my daily yoga practice and it’s a goal of mine to get back into a (nearly) daily yoga routine again. My main goal (besides finding balance within myself, duh) is to expand my practice to learn more advanced poses and flows to incorporate more arm balances and handstands to my practice. I am obsessed with Yoga with Adriene! She is an incredible instructor and I absolutely adore her. Not only does she have a super yummy, satisfying and did I mention FREE 30-day yoga camp to challenge you, but she also takes the time to explain the foundations of yoga  to help beginners and seasoned yogis alike to light their inner fire.

I recently participated in my very first aerial yoga class at Sanctuary Studios in Plymouth and it was SO. MUCH. FUN. If you haven’t tried it yet, this is one bandwagon you want to get on to.

I also have a weight lifting bench and weights at home that doesn’t get nearly enough use… but, I do some heavy lifting, too! Everything is always a work in progress. I’m so excited to see what my body can accomplish. 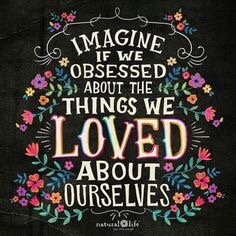 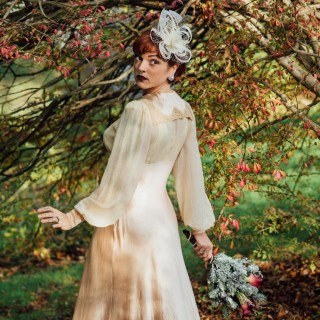